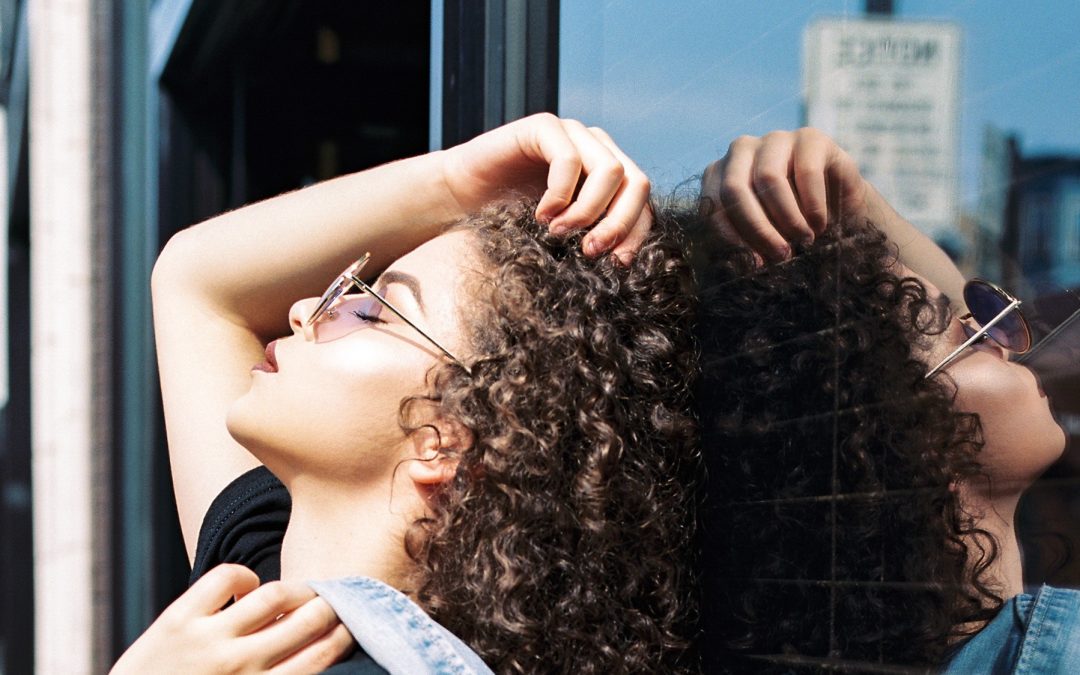 Facial Feminization Surgery (FFS) most often includes work on the forehead and we receive frequent questions about it.  In this post, we’ll address how Dr. Cardenas performs Type III Forehead Bone Reconstruction which is one of the available procedures for forehead feminization.

To begin, we must consider what a feminine forehead is and how it differs from a masculine forehead.  A male forehead typically has more outward projection than a female forehead.  This boney projection is comprised of the supraorbital rims just beneath and slightly above the eyebrow as well as the glabella between the two supraorbital rims.  The prominent lower-center part of the forehead is a result of the frontal sinus and the section of bone that covers the frontal sinus.  However, it is important to note that about 5% of patients don’t have a frontal sinus at all and about 10% may only have a frontal sinus on one side.  A typically male forehead also tends to be taller and appears to be larger than the average female forehead.  These, however, are generalities as some cis-females appear quite feminine despite lacking a perfectly flat forehead.  And, some cis-males may appear quite masculine despite lacking a strong projection from the brow bossing.

There are two main procedures that you most often hear about when discussing feminization of the forehead.  Forehead Bone Contouring shapes and reduces the bones of the lower forehead with a shaving technique.  In contrast, Type III Forehead Bone Reconstruction involves temporarily removing a section of bone covering the frontal sinus as well as some bone shaving to adjacent areas.  The thickness of the bone covering the frontal sinus and the size of the sinus itself are the main factors assessed in determining the best approach.  This layer of bone may be thick or thin and the sinus itself may be large, small, or non-existent.  Patients with a thin layer of bone covering a frontal sinus of significant size may have too much outward projection from the center of the lower forehead.  However, these patients would not benefit much from bone shaving due to the limited amount of bone available for contouring.  The solution to this problem is Type III Forehead Bone Reconstruction.

When performing Type III Forehead Bone Reconstruction, Dr. Cardenas begins by making an incision along the patient’s hairline or, in some cases, behind the hairline.  After gaining access to the forehead, a thin layer of tissue called the periosteal flap is pulled back to expose the bone underneath it.  A technique called Transillumination is then used to determine the exact size, shape, and location of the frontal sinus.  The outline of the sinus is marked while the bright surgical beam illuminates it. 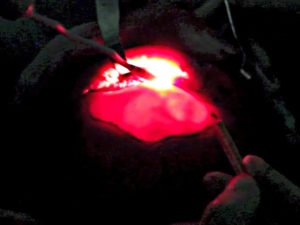 Transillumination to expose the frontal sinus

After the thickness of the bone covering the frontal sinus has been determined using transillumination, it is reduced and shaped to a safe limit using the bone shaving method.  The bone shavings are set aside for use later in the surgery.  The bone is then cut along the lines marked during the transillumination process and it is removed from its position covering the frontal sinus.

Mucus membranes within the cavity are removed followed by shaping of the upper lid of the sinus.  The inside face of the section of bone that was removed is then contoured as necessary.  Keep in mind that only remodeling the center of the forehead would be insufficient for most patients.  For this reason, the supraorbital rims are also contoured using a shaving technique.

As the surgery nears its completion, the section of bone covering the sinus is set farther back and sutured into place.  The bone shavings are then combined with the patients own platelet-rich blood plasma to form a bone paste which is used to seal the bone incision surrounding the frontal sinus.  The periosteal flap that was pulled back at the start of the procedure is sutured back into place.  This flap is important because it irrigates and helps to heal the segment of bone that was cut.  Hairline advancement and the lifting of the eyebrows is often performed prior to suturing the hairline incision and completing the surgery.

Type III Forehead Bone Reconstruction is more invasive than Forehead Bone Contouring.  One of the risks associated with the cutting and temporary removal of the section of bone covering the frontal sinus is osteonecrosis, or the death of bone tissue.  This complication is quite uncommon but can occur when the body fails to reestablish sufficient blood circulation to the bone.  The patient, however, shouldn’t experience any symptoms from this complication due to the plugging of the frontal sinus which was done during the surgery.  The body will slowly grow new bone over time to replace any areas of necrosis.

Type III Forehead Bone Reconstruction can certainly produce some amazing results and should be strongly considered when the patient’s anatomy requires it for the best results.  It is, however, important to note that some patients can achieve equally impressive results with conventional contouring.  This depends on the patient’s anatomy.  An ethical surgeon will always help the patient to select procedures which will produce the desired results with the lowest risk of complications.  In other words, if more than one procedure would produce the desired result, the procedure with the lowest risk should be recommended instead of the procedure with the highest cost.  Facial Feminization Surgery is certainly not a one-size-fits-all set of procedures and must be customized for each patient.